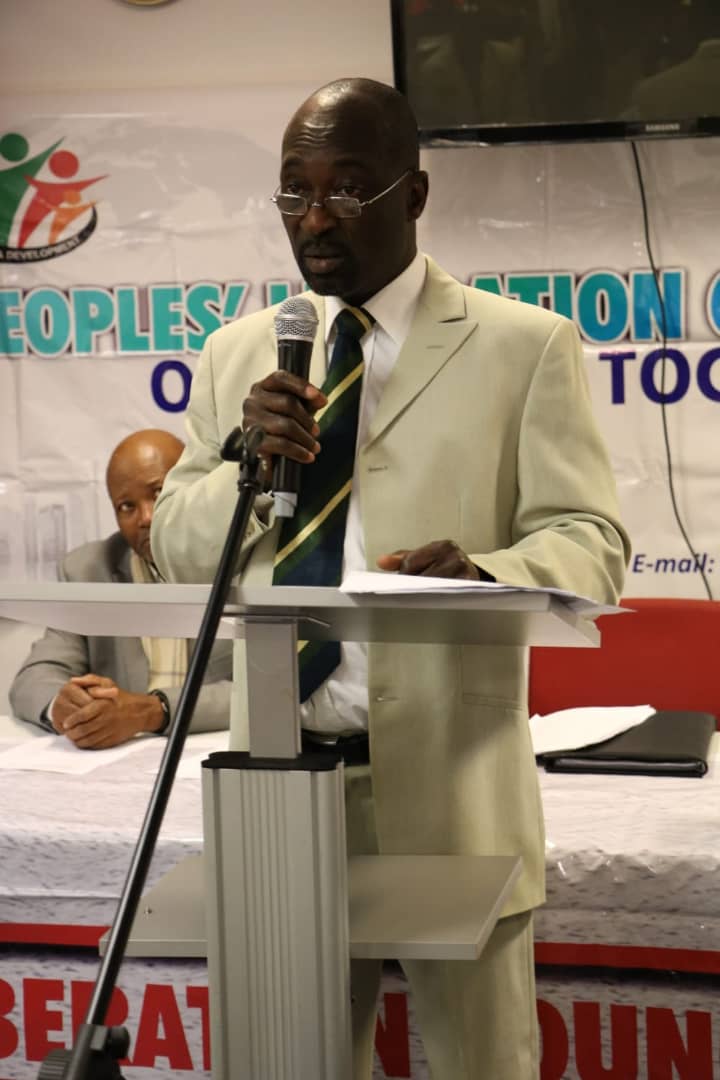 THE WESTERN TOGOLAND SITUATION AND THE PLC

Chairman, Fellow human beings of good conscience, human rights enthusiast,  I salute you all this memorable day. I cherish your passion for Western Togoland which has made it possible for you to honour the invitation to this wonderful and bold step of the Peoples’ Liberation Council of Western Togoland. My first and foremost gratitude goes to the Source of all existence for sustaining us in creation so that we too shall live to establish Western Togoland as part of a manifestation of his Kingdom on Earth.

To do justice to the theme “Rebuilding Western Togoland into a noble state-what can you do?” I implore you all to kindly follow me in pictures into what is going on in Western Togoland.

Picture to yourselves a prince who has a slave boy. His father, a king who also has a slave girl under the care of the Prince.

As you can all bear with me, there is no unconditional marriage in creation. So the king  told the prince to pass the couple through the normal marriage processes  of documentation and admonition. And then  the slave boy should also be set free.

What later happened was that the Prince prepared a document of admonitions for the slave boy without any reference to the relationship between the two slaves. And the slave girl was left an orphan without a guardian to advise or console her.

Then, on the very day the slave boy was being set free, he took along the guards of the Prince and forcefully went into the slave girl thus taking her for a wife against her genuine will.

The Prince also reported to the King that day that the slave boy had been freed on the bachelor’s night and the marriage of the two slaves began at the same time.

What level of morality can you deduce from this act?

Mr. Chairman, ladies and gentlemen, the UNO is the King, UK is the Prince, Ghana is the slave boy and Western Togoland the slave girl. Ghana’s Independence Act is the Admonitions (for Ghana alone) the Bachelors night was the eve of 5/6 March 1957.

So you can see how insincerity got anchored in Ghana till now, and picture to yourselves how uncomfortable Western Togoland and her citizens are.

While the slave boy finds it difficult to care for them, the slave girl and her children have decided to make use of whatever amount of liberty they have, in order to secure whatever they deserve.   So, what is wrong with the children  buying their own basic necessities and even managing their own affairs?

THIS IS EXACTLY WHAT THE PLC HAS INITIATED ALONGSIDE THE DEMAND FOR A REVIEW OF THE CONDITIONS OF THE MARRIAGE BETWEEN WESTERN TOGOLAND AND GHANA.

The Peoples’ Liberation Council of Western Togoland sees Western Togolanders in this situation as children of parents who came together through an incomplete marriage arrangement. The mother became desperately uncomfortable even after 61 years of coexistent with Ghana as married partners. This is simply because apart from being taken through rape and abduction, her human dignity was continually trampled upon and her children were considered and treated as illegitimate plebeians.

Some of the children demand divorce in order to restore dignity for their mother and themselves while others in fear for the downside of divorce and the woeful treatments by the power in control, turn blind to the plight of their mother and support their father in his arrogance perhaps in order to secure favour in his site.

The man is taking steps to terminate any further pregnancy and even eliminate the loquacious children who always complain of shame and scandal in the family. Tension is mounting each day as the illegitimacy of the children appears to be a major point of contention between the “patriarchs” and the “plebeians”.

The understanding of the Peoples’ Liberation Council (PLC) of Western Togoland is that, should the mother die in the hands of the father, all the plebeians will become disdainful orphans. There is no pride for you when your father murders your father even if the marriage was as scandalous as that of WESTERN TOGOLAND (United Nations’ slave girl under British care) and GHANA (Britain’s own slave boy)

Feeling strongly that peaceful measures are not yet exhausted in resolving the impasse, the Peoples Liberation Council of Western Togoland is taking steps to regularize the marriage between Western Togoland and Ghana using a NEGOTIATED APPROACH in order to restore mutual respect which alone is the key to harmonious coexistence. We of the PLC believe that by this way, the world will experience a blissful evolution of humanity in the West African sub region.

Development and harmonious coexistence shall prevail. And human dignity shall  blossom forth to the glory of the Most High.

WHAT CAN WE DO FOR WESTERN TOGOLAND ?

Western Togoland is a part of the former Togoland Territory  which has now become annexed to Ghana by plebiscite and aggression. Considered in Ghana as plebians, the humanhood of people have been disregarded in many ways. The whole country has been denied development of all sorts to the extent that citizens usually have to leave their communities into other towns in main Ghana before making their living.

The people of Western Togoland are skilful, industrious and adventurous. They are hardworking, religious and diligent. The error of UK and the U.N. which favoured Ghana to occupy Western Togoland without caring for the wellbeing or the health of her people has lingered on even unto this day.

The peoples of Western Togoland  have been persistently agitating for self determination but it appears Ghana and her compatriots have decided to turn deaf ears to their plight.

Many groups arise to fight for the independence of Western Togoland and they are always treated with the same method of twisting  the country’s laws to intimidate and persecute them or in some cases chased out their prominent personalities into exile or imprison the indefinitely. Some of the tricks played by Ghana to consolidate their hold on Western Togoland is to sow disunity among the rank and file of the fighting fronts even to the extent of fanning tribal conflicts through re-demarcation of regional boundaries in Western Togoland along tribal lines, provocatively naming part of it after an Ashanti King who is foreign to the land. This conflict could make the country ungovernable even if Western Togoland becomes self governing. So you see the situation in which we are placed now.

The PLC however emerged to create a common ground for leaders of the various groups to commune and strategize as shown here:

A serious fighter must have no time to blame anybody while the enemy is still advancing.

So, thanks to providence an alternative plan was quickly developed which became the magic wand for mobilizing the masses for the agenda.

The organizers of the PLC changed the plan and opened the bottom of the bottle. So now members of each group have the chance to come and share things in common at the prompting of PLC.  Now there are calls for unity everywhere.

• SC is the steering committee that sees to the security and sustainability of the organisation.

• PLC Secretariat is for administration.

• CCC is the Central Coordinating Committee where all Coordinators meet to evaluate activities, analyse situations and strategize the way forward.

• External Agencies is the wing that is to deal with foreign relations.

• Council of Elders is the board of advisors

• Grassroots Organizations are the various groups of masses being mobilized for executing developmental goals.

So every individual and can find a place to fit in the agenda of the PLC.

Fellow participants, the strategy we adopted is to tackle development issues through mass mobilization of the people for education and development, making use of available liberty and resources to secure what is in store for the state.

It is also our policy that we shall not mortgage the future of the people or their natural resources.

The PLC has set up a temporary office in a rented room at Ho, the Volta Regional capital for the purpose of mobilizing the masses for self help into sovereignty without use of weapons.

HOW CAN WE ACHIEVE THIS?

Mr. Chairman, my comrades, all civilized approach to solving this challenge is not yet exhausted, the  PLC deems it necessary to court the indulgence of Ghana by securing a legal backing first, so that the pure intention of the PLC must not be misconstrued and treated as a rubbish to be junked into the waste bin.

The PLC operates with the principle of making use of the available liberty to secure the necessary independence. We therefore have to make use of all our citizens abroad to establish all forms of cooperation with their countries of abode, and many countries as well. We also have to harness all manpower home and abroad to start developing Western Togoland without waiting after more than a century of retrogression and lethargy.

Dear friends, you may decide to support a sporting club, you may decide to support schools environment clubs, you may chaos to promote agriculture, a skills development incubator, a school block, a clinic, a bore hole, exercise books, school uniforms and schools are among many millions. You may decide to contribute to the upkeep of a volunteer in the service of Western Togoland.  Your support in any reasonable form shall be appropriately acknowledged. Your experiences outside Western Togoland is needed back home to build Western Togoland into a noble state. Even if you are able to organize one group each month, it is a step toward a the goal. Look within you and answer the quostion “What can you do?”

One may ask why the focus in on those in The diaspora.

●The  answer is simple, my friends: “Travel and see”; “knowledge of other people’s achievements inspires us to strive for the better”.

●A log in a river does not turn into a crocodile. We shall surely be identified as Western Togolanders.

●A reasonable cooperation between Western Togoland and the world around it is the tool for making the world a lovely place to live in.

When shall we start doing all these things? Now! Comrades,  now that you are made aware that there is an organization ready to take the mantle of playing the administrative role aborted by Britain, now that you understand that the PLC is willing to guide the people into establishing their own government, and develop their own state,   IT IS NOW THAT YOU MUST ACT.

Mr. Chairman, nobody is born to be a passive drone. Every Western Togolander home and abroad has the ability and a natural responsibility to make the world know the goodness of our country as well as to enlighten people back home of any better development elsewhere. You and I have the natural responsibility to support in making Western Togoland a land of our pride. You must act because you will know no happiness if Western Togoland is languishing in poverty and rancour. Nature forbids that. People back home are fighting the fight for us all to go back and enjoy someday.

WHAT PART CAN YOU ALSO PLAY WITH PLC ?